My trip to Detroit started poorly.  Of course, when your alarm goes off at 4:00 am on a Monday, after hosting a BBQ on Sunday, a poor start is almost guaranteed.  I woke to the alarm with my usual enthusiasm and slowly moved downstairs, holding onto both handrails as I crept in the darkness towards the coffee pot. The creation of a timer on a coffee pot is a most beautiful invention, expediting my first gulp. The flight did not leave until 6:00 am so I should of had plenty of time to shower, complete packing, verify the blog posted correctly, and drive to the airport arriving early enough to locate parking amidst the construction so I could check in 30 minutes prior to departure.  Right – all that should have been no problem.  I checked in at 5:35 am, five minutes later than required.  I was told, by a stern and completely unpleasant lady that I was too late and the flight was closed – I needed to book another flight.  The funny thing was that she went through the process of re-ticketing me, printing documents, and I made it through security with my bag and computer before the flight left.  I stood at the gate, bag in hand, and watch the plane leave that I was supposedly too late to get on!  However, the delay was only two hours, and I did not have any business that day, so I did not get too upset.

END_OF_DOCUMENT_TOKEN_TO_BE_REPLACED

There is an old saying that there is no free lunch; which implies that when you have lunch with a friend and they pay the bill, somehow that lunch was not free.  On a micro view, the lunch was free to the person not paying, on a larger perspective, the friend paid for two people.  So instead, maybe the saying should be, “Someone always pays for lunch.” There is an important distinction between not paying for something, and that something being free.  Everything we use or enjoy has been paid for by someone or some entity.  The beautiful flowers and trees that line the streets of my home town are free for everyone to enjoy, residents and visitors, but the city taxes we pay allow that beauty to continue.  I’ve downloaded free apps on my cell phone, but are they really free?  Someone worked hard to write them, and more important, I use my time during the day to use (play) these free apps, taking time away from family and work.  Time is valuable and finite, so anything that occupies our time should be more important than the time lost doing it.

END_OF_DOCUMENT_TOKEN_TO_BE_REPLACED

In old movies, there was often a part where a man was sitting on the sidewalk leaning against a worn building, wearing torn clothes that supported several days of dirt, would ask a passerby, “Hey buddy, can you spare a dime?”  After the horrifying news this week coming from London about the crime, violence, and complete disregard for human dignity, the starvation in Africa, and the emotional turmoil created by the inept political and financial management of our nation’s resources, today I think the same guy would ask, “Hey buddy, can you spare some good news?”  Even if the person walking past had some good news, he might have chosen to keep it for himself, knowing that more good news would be hard to find; as if sharing good news might dilute its affect.  Or maybe, the guy walking and sitting both needed to look deeper, inside them and outside, to find that elusive good news.

This was one of those weeks where powering on any devise that linked you to world events was a risk.  Seeing the truth of what we humans can do, or accept as justifiable, was difficult; unless one took a long moment to find some of the good that was deeply hidden in all of the bad.  That’s where we enter the conversation.  As Christians we are called to find the good of the moment, and if we are able – to be the good in the moment; it is up to us to paint the silver lining on the dark cloud.  I do not suggest that we bathe ourselves in naivety; turning away from reality so as to not see what is wrong.  No, instead we must tune our eyes and ears (and our hearts) to the frequency of what is good, compassionate, and human; we must find the people, who in the midst of darkness exhibit a flicker of light.

END_OF_DOCUMENT_TOKEN_TO_BE_REPLACED

In the world of the believer, prayer is as fundamental as a net to a trapeze artist; believers don’t go anywhere without prayer.  Life is too risky a proposition to chance a moment, day or lifetime without the support of prayer.  Is praying to God a crutch, an eternal aid to believers that gets them through the day; something that we just cannot live without, a part of our existence that is necessary for our lives to mean anything?

So if prayer is so important to our existence, why don’t we do it more often?  Maybe it is because we are not yet convinced that prayer works…every time …..all the time. Maybe we think that, like insurance, God is here for the really big stuff, but he can’t be bothered for the little things, so we don’t submit the small claims to God, only the big ones.   If we think like that, we could not be more wrong.  Our god is the God of everything, big and small He cares about it all.   This is why I know He cares about everything (other than reading the Bible where I am told He knows the number of hairs on my head).

END_OF_DOCUMENT_TOKEN_TO_BE_REPLACED 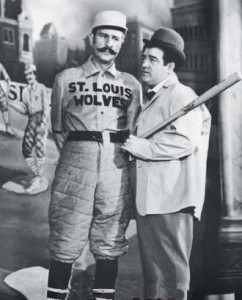 My humble apologies to Bud Abbott and Lou Costello, who made this scene unforgettable.  Once the idea for this story found its way into my head, I could not let it go………..

Two seemingly intelligent men enter the infield of a baseball field; one is the coach of the team that will play later that day, and the other a reporter for a local newspaper. Neither person graduated at the top of their class.  Sitting in chairs with the pitcher’s mound as a backdrop, the reporter begins his pregame interview with the coach.

“Great day for a baseball game,” stated the reporter.

“Every day is a great day for a baseball game,” corrected the coach.

“Yes it is.  So coach, tell me about your team.  How do you think they will do today?”

“They will win, I guarantee it,” boldly pronounced the coach.

“That’s quite a forecast coach.  Why are you so confident?”

“Because mine is the best team.”  No brag, just fact.

“OK tell me about your pitcher, what’s his name?”

“God. No last name?  Is he like one of those rock stars or something?”  The reporter already had an uneasy feeling about this interview.  “Has he got a good fast ball?  A good curve ball?”