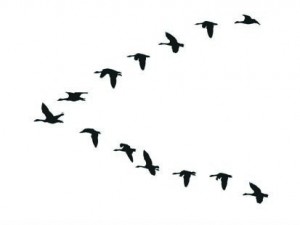 “Sorry, I didn’t mean to bump you.  But I’m worried about those Canadians,” replied the crow. “They are flying in the wrong direction, aren’t they?”

“If we are flying in the right direction, then they must be flying in the wrong direction,” sang the blue jay (its how they talk).  “After all, we are being lead by a Homing Pigeon.  He knows where he is going.”

Both the blue jay and the crow looked at the pigeon for assurance.  While none of the three birds actually knew north from south, or east from west for that matter, the crow assumed the pigeon did.  The pigeon unfortunately assumed that the crow, whom always squawked the loudest, must have the best idea where to go otherwise why would he be so loud, and therefore followed him.  The blue jay loved the melodic sound of its singing, and usually listen to its own voice much more closely than the words of others. He didn’t like being bothered by the little things in life, like where to go and when, so he left those decisions to others. The others in this case, the crow and pigeon, were equally clueless as the blue jay in knowing where to go as winter arrived.

“I’m a Homing Pigeon that is true, but that means I can find home.  Should my home be to the north, then perhaps we will find it,” said a not too confident pigeon.

“So you don’t know where your home is?” shouted the Crow.

“I’ll know it if I see it,” said the pigeon defensively, throwing his beak backwards and speeding up.  As the pigeon sped up so did the cold wind blowing directly in the path of the three unknowingly confused birds.  They flapped their wings harder but their groundspeed slowed to almost a crawl. (Birds crawl really slow, too.)

“We should land and rest,” shouted the Crow.  “It’s getting too hard to fly and I’m very cold.” They dropped toward a small grove of redwood trees looking for shelter.  Near the center, about 20 feet off the ground, they landed in a flurry of outstretched feet and fluttering wings on a branch that would give shelter from the wind and cold.  They hadn’t yet noticed the large white Dove resting on the same branch near the trunk.

“Hello friends,” welcomed the Dove.  “Please rest and warm up; there is plenty of room for all of us.”  His voice was soothing and melodic like the blue jay, but less like an orchestra and more like a single harp.  “Where are you going?”

The pigeon confidently replied for the group, “We are headed north for the winter.”

“I believe, we birds are to fly south for the winter and north for the summer,” corrected the Dove.  His voice was strong and seemed assured of his position. “Did your parents teach you NSSW?” questioned the Dove.

“Of course they did,” answered the crow, pigeon and blue jay together. “WE studied that on Sunday’s like all the other birds in our town.”

“But,” said the crow, “I don’t recall what is stands for; do you?” questioned the crow of his flying partners.  Their silence answered the question.

“It means, North Summer; South Winter,” explained the Dove.  “All children are taught this in school so they will not get lost as adults. It has been passed down for thousands of years.”  The three lost travelers were embarrassed and heartbroken.  How could they have forgotten what is so fundamental to their upbringing; to their entire way of life.

Sensing their pain, the Dove calmly said, “Don’t worry.  I know the way home to sunshine and warmth.  Follow me.”  And so they did.

As Yogi Berra said, “If you don’t know where you are going in life you might end up somewhere else.”  Choose who you follow carefully, as if your life depends on it.

“Can the blind lead the blind? Will they not both fall into a pit?”  Luke Chapter 6

“It is not the healthy who need a doctor, but the sick. I have not come to call the righteous, but sinners to repentance.”  Luke Chapter 5