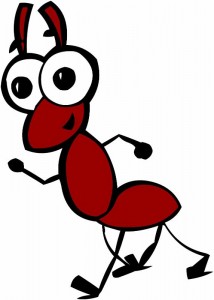 Johnny is a hard working ant, and that is high praise given that all ants are known to be hard working; however Johnny always seemed to be at the front of the line when the bread crumb is found.

“Here it is,” Johnny would scream from the front of the column, “I found the bread crumb!”  Of course, ants don’t really scream because they don’t even talk, but if any could, Johnny would be the first.  Each morning Johnny would set out from the colony in search of nourishment, because there were 40,000 ants to feed and it was Johnny’s job, along with 39,998 other ants, to find the food for the day.  Johnny took his responsibility to his family and friends seriously.

On one warm July morning, Johnny was crawling through the grass of a backyard in Rocklin in search of food. The grass was thick and tall, especially when compared to an ant, but they used their six legs to climb up, over and under every obstacle in their path.  The colony was located beneath a rose bush in the corner of the yard; a well-protected place on high ground and in firm soil.  There was a patch of grass between the colony and the concrete area where the humans often ate.  As all ants know, humans are sloppy when they eat, leaving enormous amounts of food behind for industrious insects like ant, flies, and wasps.  Humans were also very dangerous; and the more time spent in the open the greater the chances of an ant never returning home. Johnny knew the risk, still he pursued the reward.

Johnny stopped at the intersection of the grass and concrete; he could not sense any food in the immediate area, so he crawled into the open space along a crack in the center of the expanse.  He moved about 15 feet before he saw anything and unfortunately the two things he saw were in complete contrast to his health: a large piece of cake and a human standing next to it.  Cake contains mostly sugar and fat, two staple foods that ants crave.  His colony needed the cake, so forgetting the risk Johnny moved quickly toward the cake, as the human moved his foot – dragging it between the ant and the cake.  Thanks to poor workmanship of the concrete deck, a crack had formed between Johnny and the cake.  He dove into the crack and crawled underneath the human’s foot.  Unnoticed so far, Johnny felt lucky; but his luck would need to double if he was to carry a piece of cake weighing 20 times his weight without the human noticing.  He exited the crack just past the human and for the first time saw the cake up close.  It was beautiful; chocolate cake with a small remnant of cream cheese frosting.  Johnny had hit the mother lode.  He crawled forward, and simultaneously looked for an escape route and a firm place to grab the cake.  Then the human unexpectedly lifted his foot high into the air, casting an ominous shadow over Johnny and his cake; he thought the end was near.  But human took a step and stopped – the massive heel was just past Johnny.  The brave ant saw his chance, and quietly lifting the massive sugar buzz, he walked toward the grass where he would find safety, and friends to help carry the dinner home.  Many ants that night feasted on Johnny’s bravery.

Christians must be brave too.

The difference is God.

We must be as brave as a little ant named Johnny.