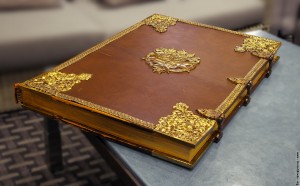 Gorda entered the Room of Past Knowledge from the south side of the complex, where the morning sun shone the brightest of the day. It was hot, passing 140 degrees as he turned the key to the massive iron and wooden door.  He moved through the threshold of gold, iron and cheesewood, meant to keep evil spirits from entering this room, into a much cooler, very ancient place.  Gorda wasn’t sure if evil spirits existed, or if their reported existence was a way for the old chemist to keep the townspeople afraid and behaved. He did know that evil was real; he had fought against it for decades, so he allowed the use of rare Cheesewood for a door frame. Besides, evil, in spirit or not, could not be allowed into this room.

His large, furry body was clothed in fine blue leather, the sign of royalty and power, and cape of woven yellow silk fell from his shoulders nine feet to the floor.  The size of this room was larger than any cottage in town.  But Gorda was king, and his stone castle, built high atop the hill across the red river from the town, was the grandest know to anyone. The room he sat in was only one of 76 in his castle and not a particularly large one either.

The Room of Past Knowledge was perfectly square, and each of the twenty-three feet high walls were fashioned with two foot deep shelves from the floor to the ceiling. Every shelf was made from the best Knockwood in the land, each filled with books. Not even the King, nor the Keeper of the Room, knew exactly how many books were stored there, because they had been collecting and storing books since before the great wars of another time.

There was a knock at the door; knowing who it was the King told his son to come in.

“Good morning Father,” said the young prince, bowing in respect as he had been taught.

“Good morning Son,” said King Gorda, not needing to get up. He motioned for his Son to come to where he was seated.  “How many moons were on the horizon this morning?”

The Prince answered, “Three.  Two to the north and one to the west.”

“And what does this tell you?”

“The harvest will begin soon,” said the boy.

“Very good, you have learned to read the sky well.  Do you know why I asked you to come here, Karman,” inquired the King?

“No Father.   Did I do something wrong?” Karman was a good boy and only rarely in trouble.

“You are not in any trouble,” chuckled the King. “I want to show you something very important.  Come sit here with me.”

The Prince climbed onto his father’s knee, something he hadn’t done for years.  There on the table next to the chair where the King and the Prince sat laid a massive leather bound book. On the cover were carvings of creatures that Karman did not recognize.  The carvings were surrounded by red, green and purple jewels; the prince had never seen such a book.

The King slid the great book closer, and after removing a key from his vest pocket, he unlocked the mechanism that held the book closed. Dust fell heavily from the leather cover as it burst open, revealing the golden pages held captive.  Karman thought he heard music in the distance, but he dismissed the sound as creaking in the castle.

The pages seemed to move on their own accord, gliding past until they lay open to the first chapter.  Karman saw it was hand written, like all books in the land, but in symbols that he did not recognize.

“What does it say,” asked the prince?

“I’ll read the first part to you. Then I will teach you the language of our ancestors, and you will read it yourself.”

The King began reading, “In the beginning God created the heavens and the earth….”

God is God; everywhere. He is God in every universe, on every planet, and in all time, from the beginning until the end. He is also God to every creature: to a ten foot tall King named Gorda from another world, his son, to you and me.