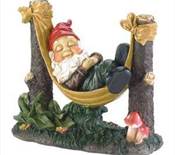 Gnomes tend to be odd little creatures by any standard one wishes to measure against.  For instance, their classified name: Gnome.  It starts with a letter that is silent; one doesn’t pronounce the “G” so why even use it?  Odd I would say.  Then their bodies are out of proportion.  Their feet are much too large given their height, or they are too short for their large, flat feet.  Their heads are also large, and are flat on top.  Not just less rounded, but flat, like a rectangular shaped pancake with grey fuzzy hair on top.  Of course they have stubby fingers, big knees, awkward legs and beady eyes, which rounds out the entirely odd package.  But then again, none of us are perfect; are we?  Given all that could be considered less-than-beautiful about a Gnome, they still remain positive in their view of life and the world, a testimate to their ability to see the greater good in almost anything.

Even Gerry is liked by just about every Gnome, a grand gesture given that Gerry is short.  All Gnomes are short, but they are uniformly short – everyone is the same height, within a ¼ inch or so, except for Gerry.  He is a full three inches shorter that every other Gnome.  This height difference is unimportant in the daily routines of sleeping, eating, walking or hopping.  But in the ancient ritual of Gnome stacking, three inches is a devastation of epic proportions.    This, as it were, is Gerry’s cross to bear, and he bears it proudly – in a diminutive sort of way.

When Gerry was in High School (just the idea of a Gnome going to a place named high anything, is laughable in a sick kind of way), his height challenge was evident, but not problematic.  Only in lunch, when the Lunch Screamer shouted the menu for the day did Gerry’s stature become an issue.  You see, Gnomes do not tilt their heads up or down very much.  It is not that they can’t, it is that for some odd (there is that word again) reason they choose not to.  And since their hearing is linear – they hear straight ahead only, not up, down, left, or right, Gerry had a hard time hearing what was for lunch.  He took to hopping (a daily routine) to hear the Lunch Screamer.  He didn’t jump in class because he didn’t much care what his teachers were saying.

Gnomes are also talented farmers, in a singular kind of way.  They grow corn, that’s all.  Not just ordinary corn, Gnomes grow corn that is perfectly beautiful, with golden yellow kernels all the same perfect size.  Throughout the centuries of their existence, the secrets of growing perfect corn have been passed down from farmer to farmer.  They are so proficient at growing corn that each year every stalk is the exact same height.  One secret is knowing exactly the right time to harvest, and this is accomplished by examining the color of the silk that protrudes from the top ear of corn on each plant.  When it becomes a golden color, not too dark or too light, but just right; then the harvest day is at hand.  To know if the color is just right, a Gnome must look closely at the silk, which creates a problem.  The top of each corn stalk is high in the air; a Gnome is not high at all.  So, the farmers developed a process they called Gnome stacking.  Through selective genetic mutation no doubt, the top ear of the corn stalk is always exactly equal to the eye level of a farmer when standing on top of two other Gnomes.  Thus by stacking three flat headed, flat footed, Gnomes on top of each other, a barometer for selecting the perfect day to harvest corn is created.   This system has been used without fail for centuries; that is until this year.

Due to an unprecedented event called Global Cooling, there has been a severe drought in the corn fields of Gnomeland.  The Arctic ice caps are just too cold to start the rain cycle.  If only the Gnomes had more gas powered combustible engines they could end the drought, but alas, they have not invented the automobile yet.  Too bad.  Sitting alone in his apartment, Gerry was reading of the potential disaster in the corn fields.  How the top Gnome in a three-stack looked over the top of stalks and could not see the color of the silk, because the crop was uniformly three inches shorter this year.  Since Gnomes only look forward, not up or down, (very odd) the farmers did not know when the perfect time to harvest the perfect corn would be.  “Oh my, oh my,” thought Gerry, “what will happen to the corn?”  Then an idea struck Gerry, perhaps his first ever.  He could see the silk, because he was also three inches shorter, just like the corn this year.  He could tell the farmers when to harvest!  So Gerry dashed to where the farmers were growing corn just outside the city walls.  (Watching Gerry dash is akin to watching water evaporate from the ocean; you know that it is happening, you just can’t see it.)

As you might expect, Gerry was the perfect height to see the corn silk atop the stalk.  There he was, the top Gnome in a three-stack, a most important job.  His parents were proud, the farmers were amazed, and the city held a parade in his honor.  For the first time in his short, unremarkable life, Gerry was a hero. Or perhaps, Gerry has always been a hero, and now for the first time, we can see it too.

Everyone and everything created by God is special, unique, and perfect.  In God’s eyes, we are all heroes, all of the time.  While adoration for a great achievement is wonderful and should be cherished, don’t wait for a parade in your honor to know that you are great, amazing, special, and flawless in eyes of He who created the universe. We believe ourselves to be imperfect, but perfection can only be determined by the One who designed us, and God says that we are “perfect in His eyes.”

God has a plan for you today and next year; it is a great plan, one that is perfectly matched to you.  Like the Gnome in this quirky story, work hard and be ready for the day that God calls you to be the hero in His story.

“As for God, his way is perfect: The LORD’s word is flawless; he shields all who take refuge in him.”