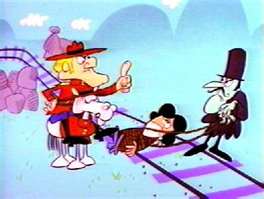 “Dudley Do-Right, you are my hero!” was the all-encompassing praise of Nell, the ever so sweet girlfriend want-to-be of the good mannered, yet bumbling Canadian Mountie.  Dudley’s goal in life, at least on the 1970’s cartoon, was to be Nell’s hero. Not a bad goal.  We humans have, since the beginning of recorded history, searched for, and identified with a hero figure; someone that we want to emulate.  Heroes are larger than life, they overcome great obstacles; heroes are fast, smart, typically good looking, wise, caring, brutal when dealing with a bad guy; yet humble, and kind to birds, kittens and bunny rabbits.  Everyone wants to be a hero (at least secretly), and identifies with someone living, or from the past, that they call hero.  Warriors have typically made good heroes for little boys, pitting good versus evil at terrible odds; but somehow good always triumphs.  To be a hero it is important to win big and often.  Explorers also commonly fall into the hero category, especially those who travel in either a wooden ship with many large sails, or a spacecraft with a single large engine; these explorers set out for places where “no one has gone before.”  It is also important for a hero not to go to the same place over and over again, but to seek out exciting and dangerous new places.  It is easier to be a hero if you are the creation in a book or movie, where life has a script to follow, and the writer can make certain that immoral choices are never made; where compromise is unknown and everyone (except for the bad guys) follows the rules.  Life is much harder for the hero who lives, breathes, and makes decisions for themselves.  We cannot just erase a bad drawing and start anew; real heroes, and their worshipers, must live with the consequences of a corrupt page.

We also like to expand the life of a hero into that of a role model.  Not only will we praise the hero, and dream of them, but we will try to live just like our hero.  “I want to be just like (fill in the blank) when I grow up.”  John F Kennedy was a charismatic leader with true vision, and a great love for his country.  Martin Luther King envisioned a better way to find the promise land, here at home.  Neil Armstrong walked on the moon – we all saw it on TV.  My list of heroes and role models included these people, and many more – sports figures, local celebrities, and of course, my Mother and Father.  My parents were not always the hero in the moment, it was as I grew older, and had children of my own that their heroism became apparent.

Also, as I have aged, the reality that a hero / role model was imperfect has become abundantly clear.  Heroes are people, and people are flawed; that was not a fact when I was ten, but it is now.  Still, a person became my hero because of something specific that they were, or did:  best batting average, first on the moon, amazing speech, or the finest example of character I have ever seen.  Being human does not remove the heroic achievement, it gives it perspective.  So, to cope with the reality of human heroes, we filter out the corrupt pages and only view the ones that fit the profile of our hero: kind, strong, wise, caring, decisive, moral, and fearless – a perfect role model as defined within our very human mind.  The other pages: immoral, thief, liar, cheat, adulterer – they are torn out and cast aside, because they do not fit a hero’s mold.  It is a very natural compromise, arising from the need to have a hero in our life, and the realization that a hero cannot be perfect in all things. I still keep heroes, who are human and very flawed; because I need them, and I think they need me.  But, I realize, as I hope they do, that we are all a part of humanity, so perfection never enters into the conversation.

When I have a need for a flawless hero, I get on my knees and look up.  I do this daily to remind myself, and Him, that perfection found its way to earth just once, and left an everlasting impression on all of us.