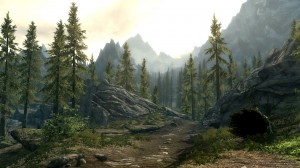 The trail master reeked with experience and confidence, his big calloused hands and the way he stood, power and humility pulsing in the same instant. He scanned the crowd and then the mountain. John watched, no studied this man, because John intended to hike to the summit on his first attempt so he intended to stick very close to the guide. As luck would have it, the trail master shouted, “Line up in a single file behind me,” just as John walked by. He was first in line and right behind the master. Perfect.

“Listen closely please,” commanded the leader. “We will be starting the climb in three minutes, so get prepared. The trail is steep at times, but not too steep to climb. If you follow me, and do as I tell you, we will all get to the top safely.” The master hesitated for effect. “There are also many resting places on the mountain, but do not stop until I tell you to rest. If you stop before I say to, you will become lost – It is easy to get lost on the trail leading up. Remember – follow me and you will not fail.”

Well, those instructions seemed easy enough for John. Just follow the master and before you know it, you’ll be at the top. John had been told that this was a difficult journey, and “only very few would make it.” He was ready to be one of those who did.

Shuffling up to the end of the line were the teenage boy, and one of the women. He was dressed in worn, dirty clothes, and had a loose, uninvolved demeanor to match. She looked to be in her mid-thirty’s, and was very attentive to the words of the guide. She was also ready.

The trail master briefly looked upwards while mumbling something to himself, and then started to walk. His pace was moderate, and constant; he walked like he knew where he was going. John stayed directly behind him, even trying to walk in the leader’s footsteps. The three guys behind John laughed among themselves about John being a teacher’s pet, and kind of a “brown nose.” John didn’t notice or care.

They were well up the mountainside later that day, as the trail turned sharply east a large green meadow with purple and yellow wildflowers came into view. In the center of the meadow was a pond, fed by a stream ending in a waterfall. There were beautiful women swimming in the pond, and on the sand were blankets with containers of food and wine. John assumed this would be a rest stop, but as if he knew his thoughts, the trail master shouted, “Don’t stop here. I have a better place planned up the trail. Follow me!”

The three guys behind John thought following him, and choosing to leave behind cute girls, food and wine was just a dumb idea. They quickly left the trail, heading for the pond, as did several others. John didn’t look back, but kept his eyes on the trail and the guide. Soon, it was time for a rest; the trail master called for everyone to sit on the rocks that lined the trail in a level area. The master counted the people; there were twenty-three left. Evidently the scraggly teenager had stopped 100 yards into the walk and turned back, stating he was, “too tired.” The attentive lady was last in line, but still looking very fit and healthy. Some complained that the trail was too steep and difficult; some said nothing during the rest. The trail master continued to look upward and mumble to himself, until it was time to continue the journey.

Later in the day the trail turned eastward again, revealing another beautiful meadow, absent the pond this time. They did see gold rocks, not mere nuggets, diamonds the size of your fist, and many rare jewels just lying on the ground. By simply filling your pockets with stones lying at your feet, one could live a life without worrying about money.  The wealth available to be had for no effort was unknown to these people.

“Not here either,” shouted the master. “I know a better spot.” And just as before, people left the trail, running as fast as they could to pick up the gold and jewels. John saw several men fighting violently over the same shinny rock. Then the trail turned upward and John continued his practice of walking in the master’s steps.

Soon the guide called another break. When everyone had found a place to rest under the tree, there were only eight people left. John was amazed that so many people had left the trail. The instructions were very clear – stay on the trail. Although the pond was tempting, and the diamond he saw would have made John the wealthiest man in his town, they somehow did not seem as important as getting to the top of this mountain.

The small group was walking again. A nice looking, middle aged man abruptly sat down stating, “I am done with this nonsense, and will sit here until I decide it is time to walk. I am tired of taking orders.”

Moments later, seven weary hikers with their guide crested a small hill and the top of the mountain came into view; only 50 steps to go. When they had reached the peak, John thought it to be the most beautiful view he could ever imagine.  Striking orange, red and blue in the sky, and all around, as far as he could see was a forest, dotted with snowcapped mountains, green trees, and flower filled meadows.  This place was equal to a thousand climbs just like the one he had just finished.

John turned in time to see the trail master lifting his backpack to his shoulders and walk towards the trail.

“Where are you going,” inquired John?

“Back down the trail.”

The master smiled, “To help those people who are lost to find the path once more.”

“But what if they don’t want to come,” asked John.

“Then I’ll wait until they do.”

Finding our own path, whether that be education, career, spouse or our understanding of God, is an enormously difficult undertaking.  It requires patience, faith, and perseverance to avoid the many distractions that will keep each of us from becoming who we are destined to be.  Having the internal fortitude and focus to stay on your chosen path once you find it, is a quantum leap in difficulty.  Fortunately, we do not have to travel alone.  Ask you wife or husband, friends at church and family for help. Climbing is easier when there is someone nearby to hold the rope, or flashlight.  And do not forget, the Trail Master will never be far away, He will always be waiting to help you find, and stay on, your path, the one He made only for you.