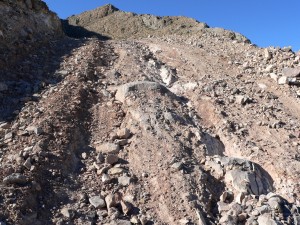 “Let’s do something else,” suggested John, “this game sucks.”  The palm of John’s hand was red, and his pointing finger looked like it was swollen.

“It only sucks when you are losing; loser!”  Billy and Eddie showed no mercy – for a moment.  Then they relented to their friend’s suggestion, “So then what do you want to do?”

“Let’s go up to the top of the hill and throw dirt clods at something,” answered John.  The hill started where Eddie’s back yard ended.  It was closer in shape to a small mountain; perhaps a half mile climb to the top, but the hill was steep and unfriendly in many places.  Loose rocks and soil from years of erosion had turned most of the trails into washed out gullies.  There was still one trail used by the quad riders that was in pretty good shape; the boys had climbed it many times.

“Hey, let’s race to the top.  Winner gets dibs on the TV remote tonight,” chimed in Billy.  Billy was the fastest on a flat road, Eddie was the strongest, and John was the best climber.  Usually in these races to the top Billy or Eddie won; John was always last, but not usually by much.  Control over the remote to the 55” HD TV in Eddie’s basement was a cherished position of power.

“I’m in!” yelled Eddie and John.  Saying no makes you a sissy and uncool.

They made their way to the back yard where Eddie’s dad had built a gate last summer.  Most homes in town didn’t even have a fence, but Eddie’s parents were a little paranoid (at least that is what people said) so they built one soon after moving in.

The three boys slouched at the bottom of the hill where the quad trail started.  Just to the right of the quad trail was one of those trails turned gully.  The quad trail zigged and zagged its way up to the top doubling the height of the hill.  The gully went almost straight up, only moving left or right to make room for a large rock.  John studied the two trails for a few seconds before pointing to the trail on the right and pronouncing, “I am running up that one, and I will be choosing the TV shows tonight.”

“Are you ignorant?” screamed Eddie!  “If choosing a TV show is that important you can have it, ‘cause I am not carrying you down the hill when you break a leg.  Do you hear me?   I’m not gonna do it.”

Billy joined in, “Hey, you got nothing to prove.  Just because you got beat in fast ball and have never been to the top first doesn’t mean anything.”  After Billy was done he wasn’t sure if he had said the right thing.

John was determined. “I am not going to get hurt.  I can’t run fast but I can climb.  Let’s get going; I want to throw some clods.”  He readied himself into a crouched position, with one arm in front and the other stretched in back. “Ready. Set. Go!” Just like that, John ran to the washed out gully and scurried upward.

Eddie and Billy took off in a cloud of dust. The race was on.

The gully was dangerous from all the loose rock, but today John seemed to find the right place to plant his foot, the right rock to grab for balance.  He was in a zone, no on his zone and the ascent to the top was going fast and smooth.  Meanwhile, Eddie and Billy were running as fast as they could, but theirs was a long path and each had already had to stop to catch their breath.

John was over half way and wasn’t too tired yet.  He crouched down in steeper places, like a crab but moving forward, so he could use his arms and legs to climb.  The dust formed a thick cloud surrounding John, and while squinting to see he reached for a rock the size of basketball – and missed.  He slipped, rolled to his shoulder, then his side; landing hard and immediately sliding down the hillside.  Eddie and Billy could see him, so they stopped running, afraid for their friend, and yet secretly happy that one of them might win.  John would not be held back today though, and he slammed his almost new tennis shoes into the rubble, grinding slowly to a stop.  The dust settled mostly onto John it seemed, but the air eventually cleared.  When it did, John rolled over and was again doing his best imitation of a mountain goat, moving sure footed and fast.  The hill could not stop John today.  By the time Eddie and Billy joined him at the top, John was breathing normal and smiling wide, thinking about what shows he would choose to watch tonight on that big TV.

When it is time for you to get to the top, God will point to the narrow trail, the one that is less often used and harder to climb.  He isn’t making your life more difficult.  He is making your ascent to the top so much more gratifying when you arrive.  When you let God direct your climb, you will always make it to the top.